Research interests
​I am broadly interested in nearshore marine ecosystems and species with a focus on community and food web ecology. I am intrigued by research questions at the interface of ecology, conservation, and management. I use a combination of observational and experimental techniques to understand the drivers of community structure and function, and the strength of interactions among species and ecosystems. I am also interested in how ecological patterns and drivers can be influenced by spatial and temporal scales. My research draws on both my classical (biology) and applied (fisheries) training to approach questions with the understanding that our world is an interconnected system with multiple valid and useful perspectives on structure, function, and what is “good”, “natural”, and “healthy”.
Land acknowledgment
I have been incredibly fortunate to conduct research in some amazing places and recognize these places as the ancestral homelands of Alaskan Native and Native American Peoples. I currently live and work in the traditional lands and waters of the Coast Salish People including those of the S’Klallam, Samish, Tulalip, and Lhaq’temish (Lummi). I am grateful to live and work here and for the past and current stewardship of the land and waters. Previously, my PhD was conducted on the traditional lands and waters of the Tlingit and Haida of Southeast Alaska and benefited from numerous conversations with community leaders and members who hold an intimate knowledge of these ecosystems. I am grateful for these opportunities and thank the Klawock Cooperative Association and Hydaburg Cooperative Association for their support of my PhD and APECS research.
​ 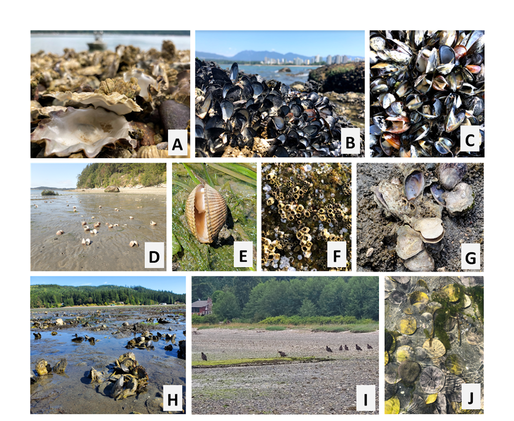 Scenes of invertebrate mortality post 26 - 28 June heatwave. Photos by T. King (A), C. Harley (B,C,F), J. McArdle (D), H. Hayford (E), B. Paul (G), A. Raymond (H), C. Burns (I), and J. Werner (J).
Heatwave effects on Salish Sea Shellfish
From 26 – 28 June 2021 much of the Pacific Northwest of the United States and southern British Columbia, Canada experienced and unprecedented atmospheric heatwave. This event broke all-time high temperature records throughout the region and made international headlines. The heatwave coincided with the lowest low tides of the year, therefore exposing intertidal organisms to extreme temperatures for extended periods of time over multiple days. Following the heatwave many regional scientists and members of the general public reported conspicuous mortality of many shellfish species throughout the region. Leveraging a multi-organization effort to assess post-heatwave condition of intertidal shellfish I led analysis and synthesis of 203 observations spanning ~700km of the west coast of North America. This project would not have been possible without the hard work and observations of many people. In total over 25 individuals reported post-heatwave observations representing universities, tribes, and state and federal agencies. A manuscript detailing our work is in review at Ecology. 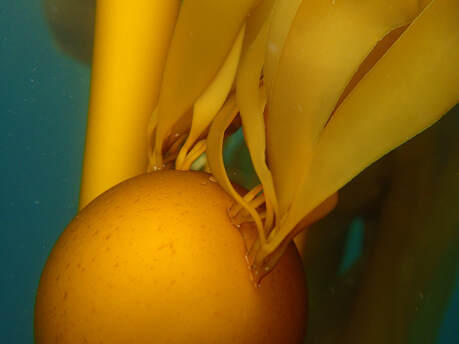 Bull kelp near Prince of Wales Is. Alaska. (W. Raymond)
Floating kelp canopy area indicator for Puget Sound Vital Signs
Canopy forming kelps are a major component of nearshore ecosystems in Washington State and in temperate seas around the world. Kelp forests are foundational species which support diverse fish and invertebrate communities and provide numerous ecosystem services. The WA Puget Sound Partnership (PSP) is tasked with tracking the health of the Puget Sound socioecological system through a system of Puget Sound vital signs. Recently, canopy kelp was added as an indicator to the “Beaches and Marine Vegetation” vital sign in an effort to expand the scope of the vital sign program. Myself, along with collaborators from WA Dept. Natural Resources, University of Washington, Samish Tribe, WA Sea Grant, and Marine Agronomics, are developing the canopy kelp indicator for eventual integration with PSP vital signs. Our goal is to combine multiple perspectives and data sources so that the indicator captures the spatial and temporal dynamics of canopy kelp in WA and is understandable and useful to a diverse audience. Follow our progress here. 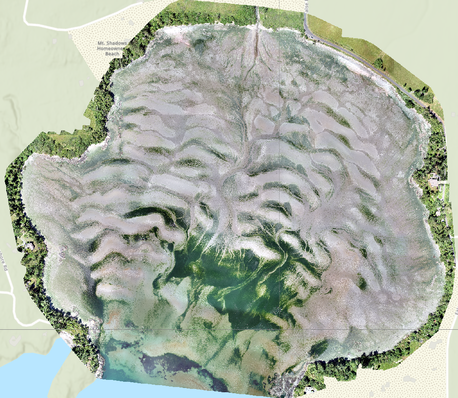 Drone image of False Bay, San Juan Is. WA. (W. Raymond)
Green tides
The periodic over-abundance of green macroalgae, also known as “green tides” is on the rise around the world. Often the consequence of eutrophication from agriculture and other human activities, green tides can lead to hypoxia, sulfide poisoning, and loss of seagrasses and benthic invertebrates. Using the False Bay estuary and watershed on San Juan Island, WA my collaborators and I are investigating the drivers and consequences of green tides in the bay. Currently we are combining water nutrient analysis, intertidal surveys, stable isotope analysis, eDNA, and UAS imagery to build a baseline of Ulvoid algae and nutrient dynamics in the bay and watershed.

​Apex Predators, Ecosystems, and Community Sustainability (APECS)
Led by Ginny Eckert at University of Alaska Fairbanks APECS aims document the role of apex predators and environmental drivers on changes in nearshore marine resources, ecosystems, and humans. APECS uses an interdisciplinary approach that integrates ecological studies, traditional knowledge interviews, and ecosystem services quantification and valuation. This research examines changes in the marine environment over a period of time in which sea otters were extinct and then recolonized. Much of my PhD research was conducted under the APECS umbrella.

Testing the generality of sea otter‐mediated trophic cascades in seagrass meadows
As a part of the APECS project, I investigated the role of sea otters in seagrass meadows in Southeast Alaska. Sea otters caused a dramatic shift in seagrass communities in California, including an increase in seagrass biomass despite harmful eutrophic conditions. Building off of this research and similar patterns in the Northeast Atlantic, we tested the generality of sea otter mediated trophic cascades in Southeast Alaska. In 2017 the APECS team collected data from multiple eelgrass sites on Prince of Wales Island on eelgrass, epiphytes, grazers, crabs, fishes, and sea otters. Our analysis found some of the predicted trophic cascade relationships seen in California and NE Atlantic, however others were absent. Notably we did not find evidence for a negative relationship between crabs and seagrass epifauna, a critical link in the hypothesized trophic cascade, or a strong positive association between sea otters and seagrass biomass. Given the lack of evidence for all hypothesized direct relationships, we concluded that a sea otter mediated trophic cascade is not present in Southeast Alaska and could be due to local scale factors including the spatial heterogeneity, low resource availability and non-linear food chains in the region. However, correlation analyses suggest further interactions among biological and environmental variables in seagrass communities, including a positive correlation between sea otters and seagrass biomass. Our findings suggest that the effects of recovering apex-predator populations may not be generalizable across regions and spatial scales, highlighting a need for local assessment on the ecology and management of these populations. See more in our publication in Oikos.

Sea otter effects on trophic structure of seagrass communities in Southeast Alaska
Building off my research on the generality of trophic cascades in seagrass meadows we wanted to delve deeper into the trophic relationships among seagrass associated species in Southeast Alaska. For this project we used stable isotopes and fatty acids from key members of the seagrass community to trace energy flow and tease apart trophic relationships between areas of high and low sea otter occupation. Stable isotopes of the same species results show little difference between sea otter regions, however we found many species that differed in their fatty acid profiles. Fatty acid differences appear to be driven by essential fatty acids, which consumers must obtain from their diet, suggesting differing trophic structure between high and low sea otter regions. However, the mechanism by which sea otters may confer this difference is unclear. See more in out publication in Marine Ecology Progress Series.

Sea otter effects on mesopredation in seagrass meadows
This project is led by Melanie Borup seeks to understand how sea otter may affect mesopredation in seagrass meadows. Sea otters are well known for their dramatic effects in ecosystems as a product of their appetite for shellfish. However, the tickle down effects of these ecosystems changes are less clear and may be buffered by other forces. This project aims to assess the degree of predation by crabs and fishes in seagrass beds with and without a strong presence of sea otters. We hypothesize that crabs abundance will be greatly reduced in areas with sea otters, and fish will be unaffected, but will this translate to differences in predation intensity? This project is an extension of the Ocean Bitemap and APECS projects.

Sea otters and seagrass across the northeast Pacific
This project led by Joe Jackson and Brent Hughes at Sonoma State University build directly off my work on sea otter – seagrass trophic cascades in Southeast Alaska. Using data from 52 sites from Alaska to California we are testing how sea otter –seagrass community interactions change across ~20 degrees of latitude.

Bioturbation by sea otters in seagrass meadows
This project led by Tiffany Stephens aims to assess the effect of sea otter foraging for clams in and around seagrass meadows in Southeast Alaska. In the process of conducting other seagrass research in the region we observed numerous sea otter dub pits in seagrass meadows. This disturbance may have positive or negative effects to the seagrass as bioturbation of sediments could release nutrients beneficial to seagrass but may also physically remove seagrass from the substrate. Through extensive field surveys across a gradient of sea otter occupation we compared the tidal elevation of the upper edge of the seagrass bed. Our results are in the final stages and we plan to submit a manuscript soon. This project is a part of APECS.

Seagrass – sea otters – carbon
This project also led by Tiffany Stephens is designed to assess the connection between sea otters, seagrass abundance, and sedimentary organic carbon. Evidence from other regions suggests that sea otters can confer greater seagrass abundance, leading to greater carbon storage. By quantifying organic carbon from sediment cores across a gradient of sea otter presence and occupation time we aim to relate carbon storage to seagrass biomass and sea otters. This project is a part of APECS .

Ocean Bitemap - Climate drives the geography of marine consumption by changing predator communities
This project led by Matt Whalen and MarineGEO was designed to measure top-down processes (predation) in nearshore ecosystems around the world. The project utilized simple predation assays, ‘squidpops’ to measure relative predation intensity in vegetated and unvegetated habitats. To our surprise predation was greatest at mid-latitudes, in contrast to terrestrial systems. This pattern was closely related to the types of consumers present. You can learn more in our publication in the Proceedings of the National Academy of Sciences.

Trends and carrying capacity of sea otters in Southeast Alaska
This project aimed to improve the population estimate of sea otters in Southeast Alaska using Bayesian analysis techniques and by incorporating sea otter harvest data. This project was led by Tim Tinker and relied on expert input from a variety of agencies and researcher.  I have used my experience with the sea otter harvest data from my Ph.D. to integrate those data into this new population model. We found sea otter carrying capacity varies widely across Southeast Alaska and that the region could support nearly 75,000 sea otters, approximately three times its current size. You can learn more in our publication available in The Journal of Wildlife Management.

Blue carbon of eelgrass (Zostera marina) meadows in the Pacific Northwest
This project led by Carolyn Prentice synthesized sediment carbon stocks in seagrass meadows from Oregon to Southeast Alaska. "Blue Carbon" ecosystems, such as mangroves, salt marshes, and seagrasses, have been identified for their potential to store large amounts of carbon. However, detailed information on the magnitude of carbon storage across ecosystems remains sparse. Our analysis characterized carbon stocks across the Pacific Northwest in seagrass meadows providing a benchmark for blue carbon stocks in the region. You can learn more in our publication available in Global Biogeochemical Cycles.